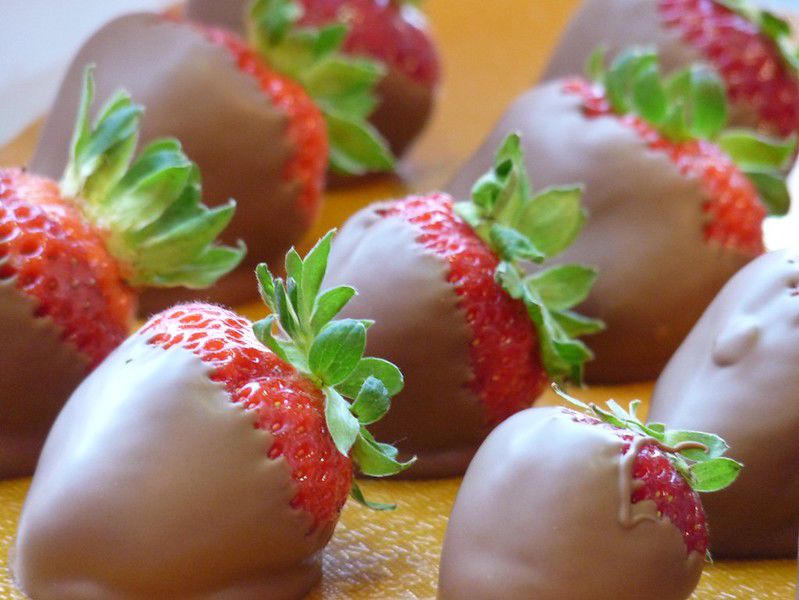 Chocolate fondue and fresh strawberries? Almost as good of a match as you and your sweetheart./Jon Gonzalo Torróntegui (Flickr) 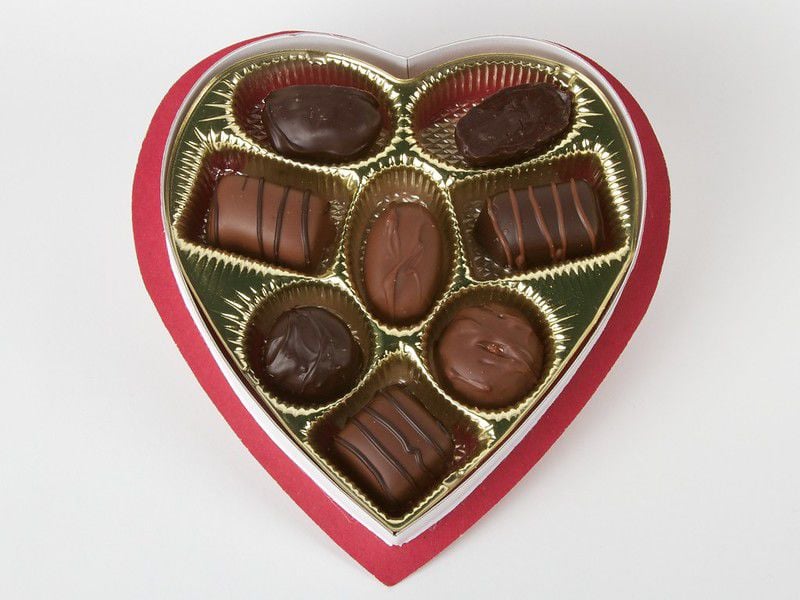 Skip the flowers and get straight to the chocolates! Nothing will make your Valentine smile like a heart shaped box./Windell Oskay (Flickr)

Chocolate! Some people are seemingly born loving chocolate; other people learn to love it, generally at an early age. Boomers may recall a television commercial featuring a duo of hand puppets spelling “N-E-S-T-L-E-S” and yawping out the final: “Chaw-w-w-w c’late!”

On Valentine’s Day, many people give gifts of chocolate. Before it became commonly available, chocolate was considered the supreme food for seduction. In India, home of that famous manual of love, the Kama Sutra, chocolate has been called the “nourishment of the Gods.” Chocolate does contain methylxanthines that stimulate transmission and conduction of nerve impulses. It also contains theobromine, a substance related to caffeine that creates a feeling of satisfaction. Even today, a box of Godiva or Lindt dainties can cause many hearts to flutter.

Cocoa contains over 500 distinct flavor compounds, creating an extremely complex taste and aroma. Just mentioning chocolate is enough to drive some people to the pantry looking for their Cadbury’s or Ghirardelli. Since the Olmec civilization, precursors of the Maya in Mexico and Central America, chocolate has been processed, prepared, and relished. The early Americans drank a beverage made from crushed seeds of Theobroma cacao — the cacao tree — mixed with chile peppers and other spices. Christopher Columbus tried it and liked it, but couldn’t understand why the New World natives treasured the beans. Ultimately, Spanish conquistador Hernando Cortez brought home three chests full of cacao beans as treasure stolen from the conquered Aztecs.

Europe simply fell in love with it. Cacao beans, long used as currency in the New World, eventually became a casus belli in international politics. Spain initially monopolized the traffic in cacao beans. France, England, and Holland wanted cultivation in their own equatorial colonies, and cannon fire settled some disputes. Other nations such as Switzerland and Germany also developed traditions for fine chocolate. Today, cacao trees are still cultivated commercially in the former Spanish America as well as the Caribbean, Africa, South-East Asia, and even in the South Pacific Islands of Samoa and New Guinea.

Making the bonbons, truffles, cherry cordials, Valentines Day hearts, and even simple chocolate bars begins with the refined chocolate. Some quality chocolates use a dozen different varieties of beans from all over the world. Fine chocolate has a bright luster and a sharp snap when broken. The more time taken refining the product, the silkier the taste and smoother the texture. Good chocolate is extremely hard and contains 50 percent cocoa butter, at the very least.

Chocolate may also provide some health benefits, despite its unwarranted reputation for causing acne and tooth decay. Research at the University of California, Davis, found that chocolate has high levels of phenolics, chemicals which may help lower the risk of heart disease. Some phenolics can prevent fat-like substances in the bloodstream from oxidizing and clogging the arteries. Chocolate is also an antioxidant, and one of its most pleasant benefits is the “good feeling” that many people experience. While chocolate contains more than 300 known chemicals, scientists have yet to isolate the one — or ones — responsible for making people smile.

I make no promises about the benefits of the following recipe, except that it is delicious. However, I have found that the act of cooking a special dish can lead my Valentine to express appreciation in a very loving fashion.

Carefully melt the chocolate in a double boiler or fondue pot. Do not overheat or the chocolate will scorch. Wash, destem, and dry the strawberries. Mix the liqueur into the molten chocolate. Dip the berries, one at a time, into the chocolate mix and share with your significant other.

Reed Hellman is a professional wordsmith living in Alberton, Maryland. E-mail your questions and comments to RHWay2Go@gmail.com.