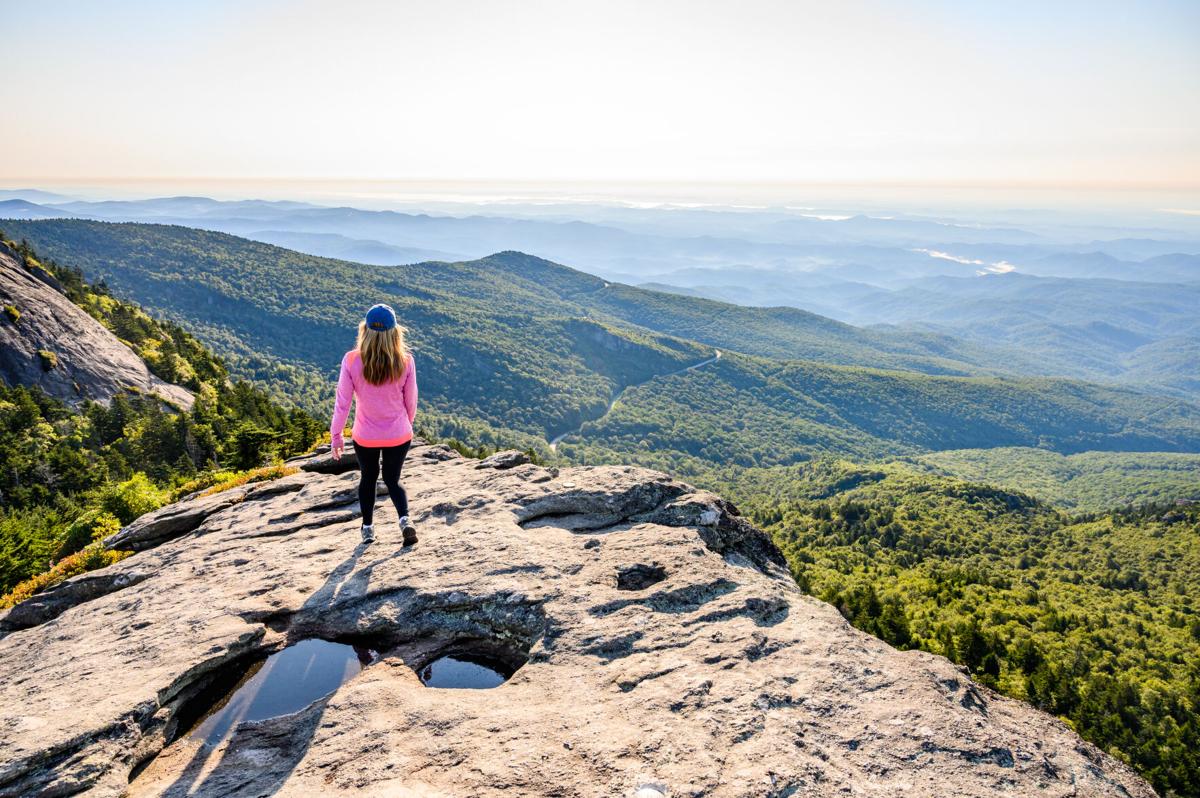 Landscape view of woman looking out at the top of Macrae Peak on the Grandfather Trail at Grandfather Mountain. Taken in daytime with mountain skyline in background./Photo courtesy of VisitNC.com 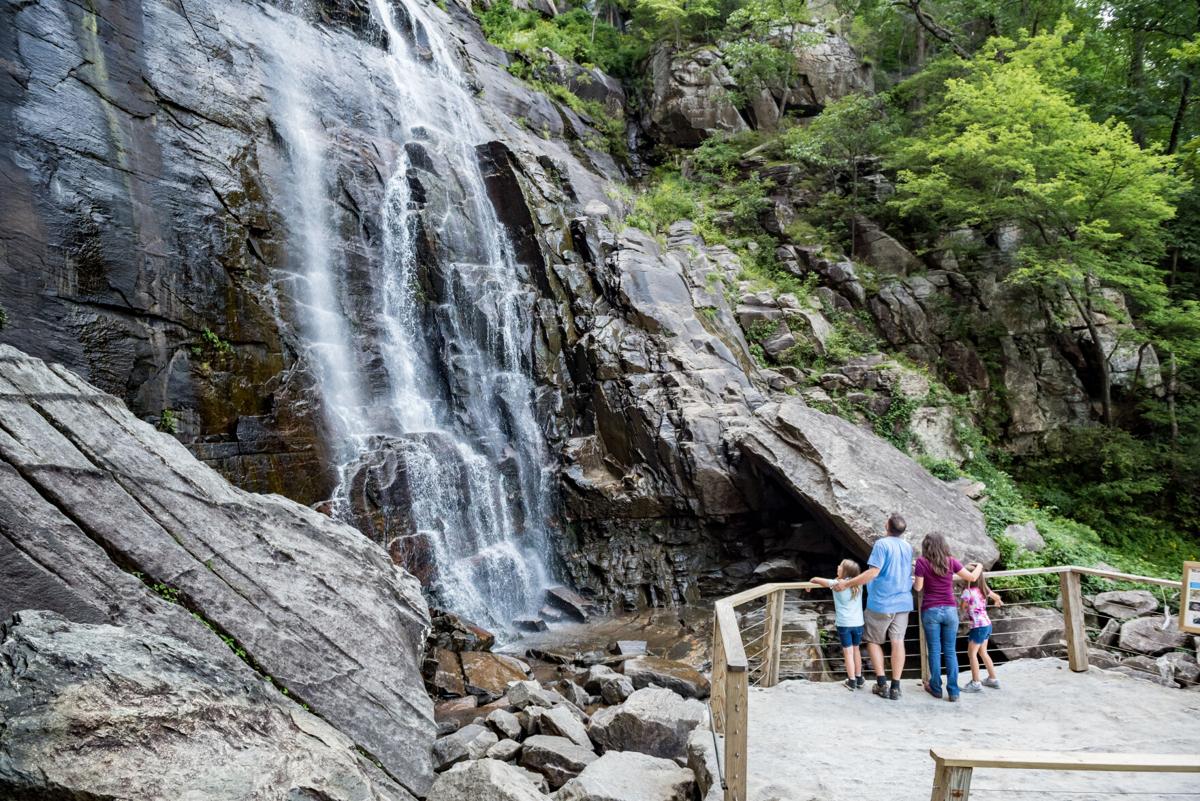 Family at Hickory Nut Falls in Chimney Rock State Park. The 1992 film "Last of the Mohicans" featured the 404-foot waterfall in its 20-minute finale./Photo courtesy of VisitNC.com 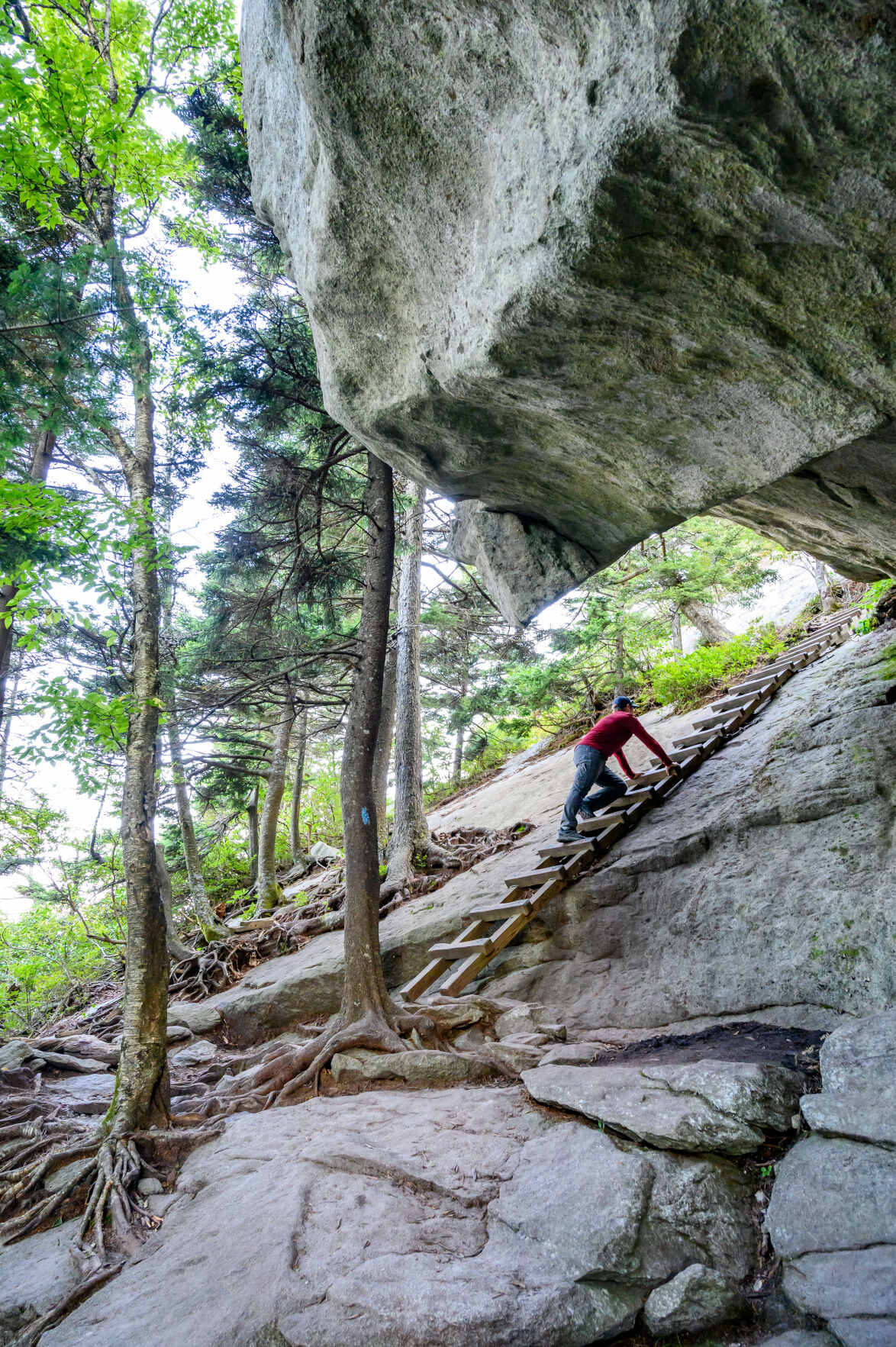 Vertical worms eye view of man climbing ladder up to Macrae Peak on the Grandfather Trail at Grandfather Mountain with tree roots at bottom of frame and rock overhang towards the right of frame. Taken in daytime with foliage in background./Photo courtesy of VisitNC.com 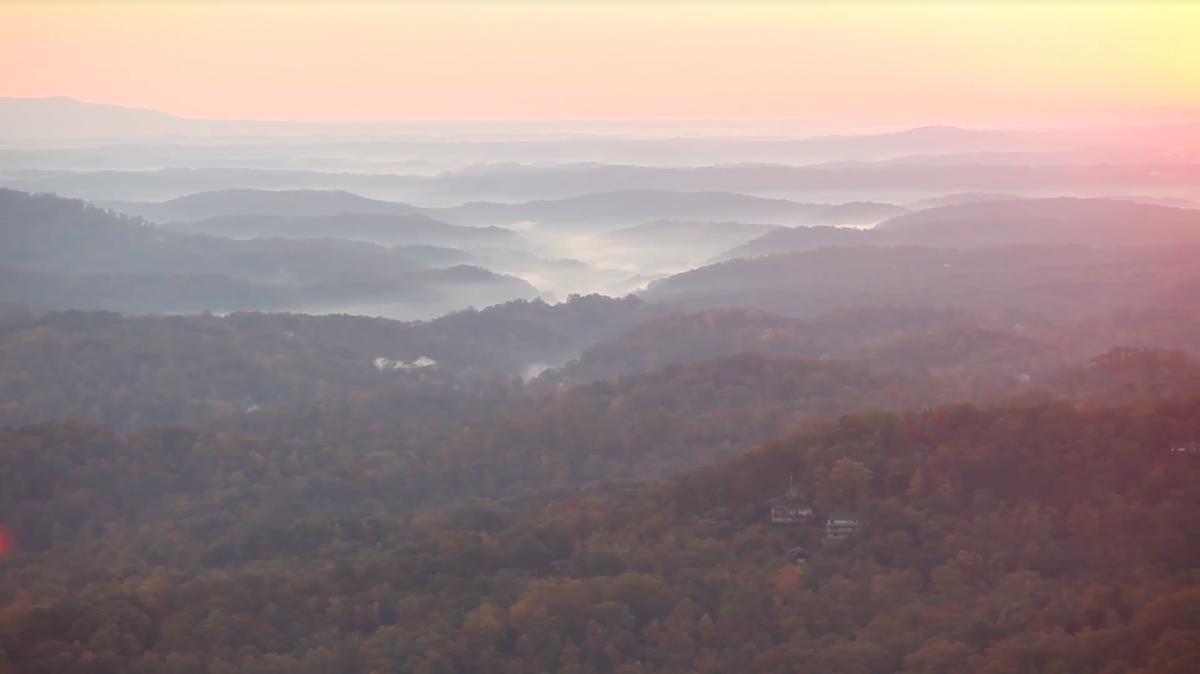 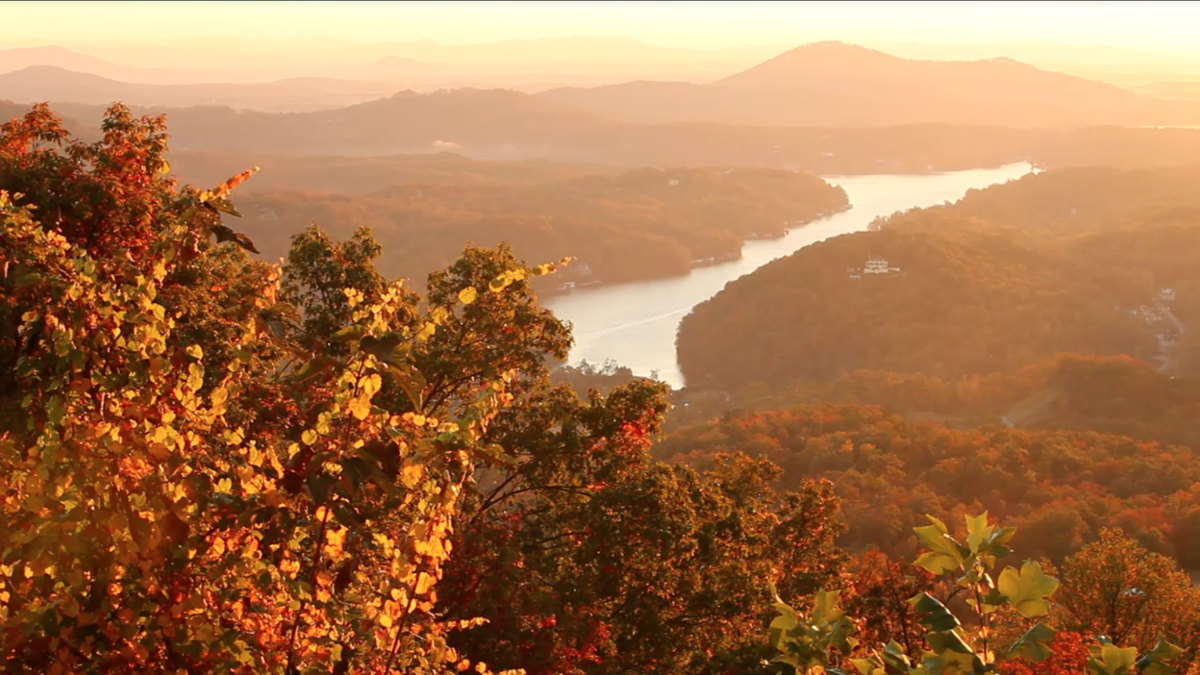 The reward of taking a new trail into uncharted territory is usually all it takes to draw outdoor enthusiasts into the backwoods. Two North Carolina state parks, both accessible from the Blue Ridge Parkway, offer backwoods adventures that are sure to please the savviest hiker. Grandfather Mountain State Park at milepost 299.9 near Blowing Rock offers seven unique trails, ranging from easy to strenuous in difficulty. Chimney Rock State Park at milepost 384.7 near Lake Lure, has six trails, rated moderate to strenuous.

A designated United Nations International Biosphere Reserve, Grandfather Mountain is a major tourist attraction, developed and privately owned by the Morton and McRae families for over a century. In recent years, 2,456 acres of the mountain have been transformed into a state park, offering spectacular hiking and backpack camping in the backcountry. The east side of the mountain, located near the town of Blowing Rock, has four trails, accessible from U.S. 221 or the Boone Fork Parking Area at milepost 229.9. The shortest trail is the easy Asutsi Trail, which covers only 1/4 of a mile. The moderate-to-strenuous Daniel Boone Scout Tail is the longest trail at 3 miles. The Nuwati Trail, an easy but rocky trail, is 1.2 miles in length, while the Cragway Trail offers one mile of rocky, strenuous terrain. The trailheads for Boone Fork and Nuwati Trails are both included in the state park. They are connected by the Tanawha Trail, which parallels the Parkway.

All trails on the west side of the mountain are accessible from N.C. 105, about 1/2 mile east of the intersection of N.C. 184. The three-mile Profile Trail, easy at the lower level, becomes increasingly steep, rocky and strenuous as it climbs upward. After crossing the Watauga River, the trail passes through rhododendron thickets and then falls under a hardwood canopy. The shortest part of the trail goes to Foscoe View, 1.7 miles away. Profile View is 2.3 miles away and takes 2.5 hours to hike to that point and back. Shanty Spring takes another half hour of travel. Calloway Gap, a goal for many hikers, is over 3 miles from the base and takes 3.5 hours for the complete round trip. Hikers may access the state park from the trailheads at no charge, but a ticket is required to access trails from the Swinging Bridge, a popular attraction on the mountain.

Crest trails present the biggest challenges on Grandfather Mountain, the highest point being Calloway Peak (5,946 feet). Access points include the Top Shop parking lot, the Hiker’s Parking Area, the Profile Trail on the west side or the Daniel Boone Scout Trail on the east side. The Grandfather Trail, 2.4 miles long, is very strenuous (requiring the use of chutes, in-place cables and ladders) while the half-mile Underworld Trail is strenuous and rocky.

Considered by some to be “the prettiest town in America,” Blowing Rock offers a plethora of accommodations and restaurants. Julian Price Memorial Park at milepost 297 offers picnicking, camping, boating and fishing. Lodgings in Blowing Rock range from mom-and-pop motels to luxurious gigs such as the Bob Timberlake Lodge at Chetola Resort and the Green Park Inn, which has welcomed guests since 1891. The food scene includes restaurant chains and upscale places such as the Restaurant at Gideon Ridge and the Village Cafe (blowingrock.com).

Developed by Dr. Lucius B. Morse and his family, Chimney Rock has been one of the state’s major tourist attractions for over a century. In 2007, it became Chimney Rock State Park which includes more than 8,000 acres. It is home to six trails, the most popular being the Skyline Trail and the Hickory Nut Falls Trail. The Skyline Trail begins at Explanation Point and ends at Peregrine’s Point at the top of Hickory Nut Falls. With an elevation of 2,640 feet, the highest lookout in the park offers fantastic views of the gorge. Rated moderate to strenuous, the trail follows the crest of the mountain, covering 2.2 miles roundtrip in 2 to 2.5 hours. At Peregrine’s Point you can hear the thunderous falls, but you cannot actually see them. If you want to view the entire falls, take the Hickory Nut Fall trail. Featured in “The Last of the Mohicans” film, this trail winds through a deciduous forest sprinkled with rhododendrons, hydrangeas and wildflowers in season. The base of the 404-foot falls (one of the tallest in the eastern U.S.) shelters rare plants and amphibians. Ideal for families, the moderate trail covers 1.4 miles roundtrip and takes only 45 minutes to an hour to complete.

The Exclamation Point Trail is a 20-minute moderate-to-strenuous uphill hike, which begins at the stairs leading to the Chimney. A combination of stairs and switchbacks lead to popular stops such as Opera Box offering views of Lake Lure and Hickory Nut Gorge and the troublesome Devil’s Head formation. At Exclamation Point hikers are rewarded with panoramic views of the gorge, including Bearwallow, Shumont and Round Top Mountains, not to mention Rumbling Bald, the Rocky Broad River and Lake Lure.

Though visitors can get to the top of the Chimney via an elevator, serious hikers are more likely to follow the 494 steps via the Outcroppings Trail. A must-stop on the trail is the Gneiss Cave, made of Henderson Gneiss granite formed over a period of 585 million years. Pause at the Grotto, Subway and Pulpit Rock for fantastic views of the Hickory Nut Gorge, Carolina Piedmont and Lake Lure. Rated moderate to strenuous, the Outcroppings Trail takes about 25 minutes (828-625-9611 or chimneyrockpark.com).

The closest town to the Chimney Rock is Lake Lure, which began as a resort in 1927 after the Rocky Broad River was impounded. It was envisioned by Dr. Morse, who began developing Chimney Rock as a tourist attraction in the early 1900s. Though the Great Depression slowed development, the town eventually grew up around the lake. Today Lake Lure offers a plethora of outdoor recreational opportunities, accommodations, and restaurants. Over the years, movie stars and other celebrities have found anonymity at establishments such as the 1927 Lake Lure Inn & Spa. “Dirty Dancing,” released in 1987, was filmed at Lake Lure and at Smith Mountain Lake in Virginia (townoflakelure.com). Nearby Asheville and Hendersonville also offer a variety of accommodations and restaurants.

The International Dark-Sky Association has designated four state parks in Virginia as International Dark-Sky Parks — Staunton, James River, Natural Bridge and Sky Meadows. An IDSP is a park that possesses an exceptional or distinguished quality of starry nights and a nocturnal environment that is specifically protected for its scientific, natural, educational, cultural heritage and/or public enjoyment. The parks achieved the designation by establishing an outdoor lighting policy that minimizes light pollution, outreach to the local community and hosting and promoting programs for guests to enjoy stargazing (virginia.org).