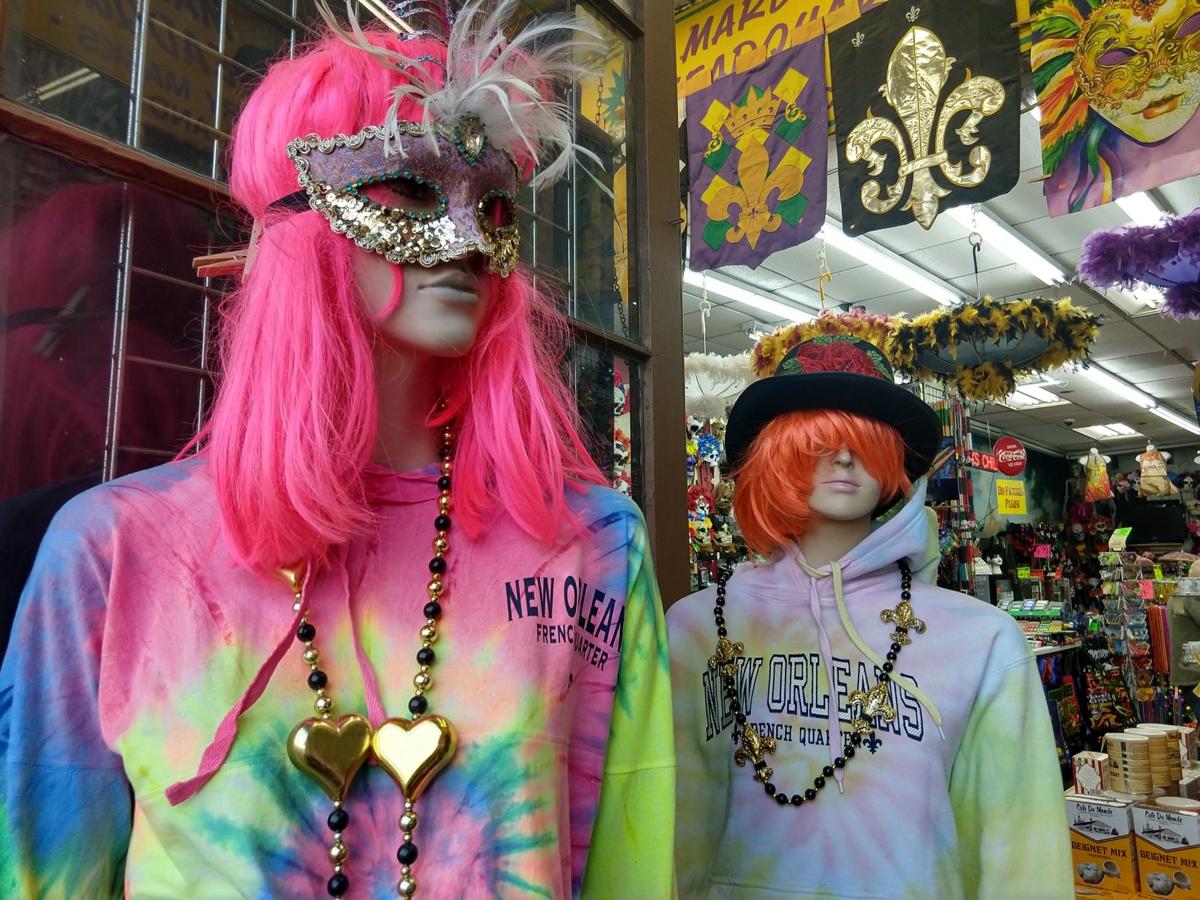 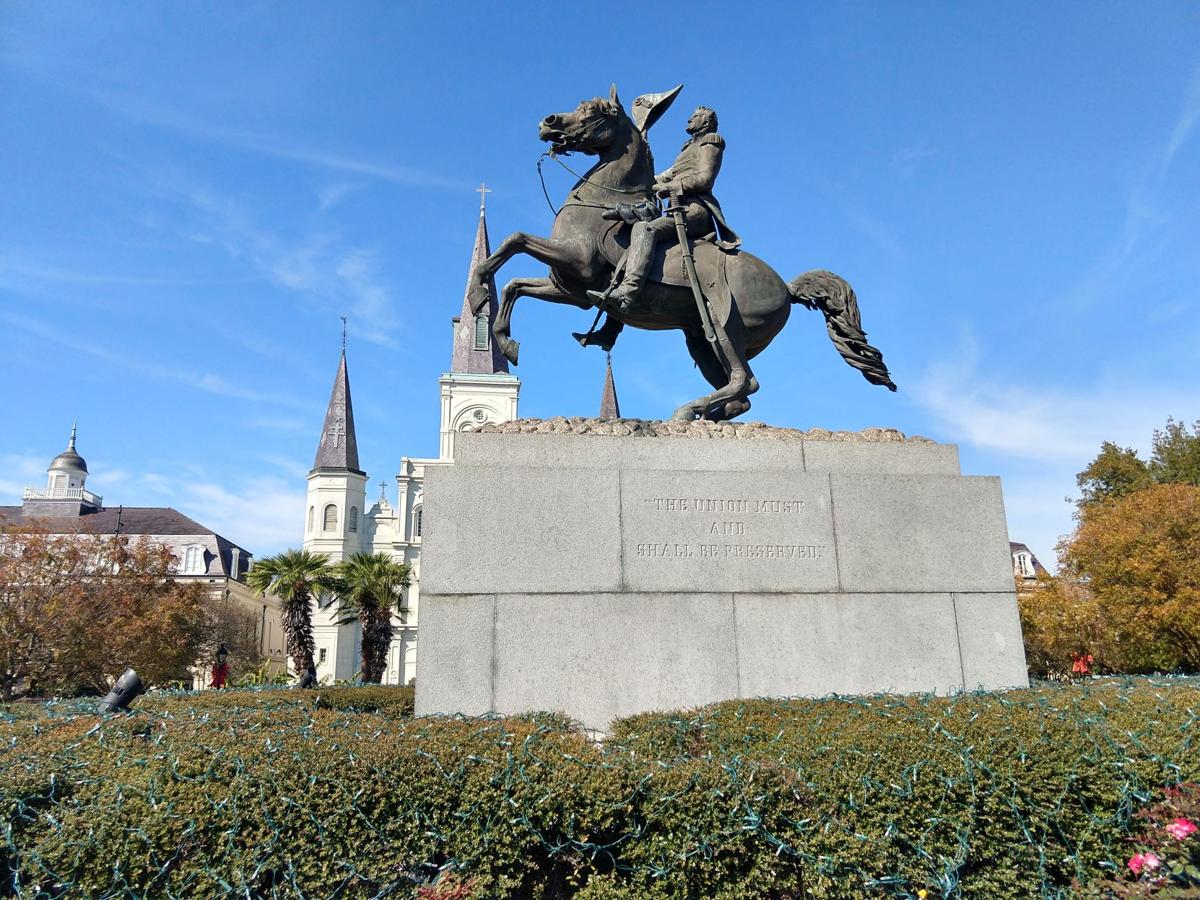 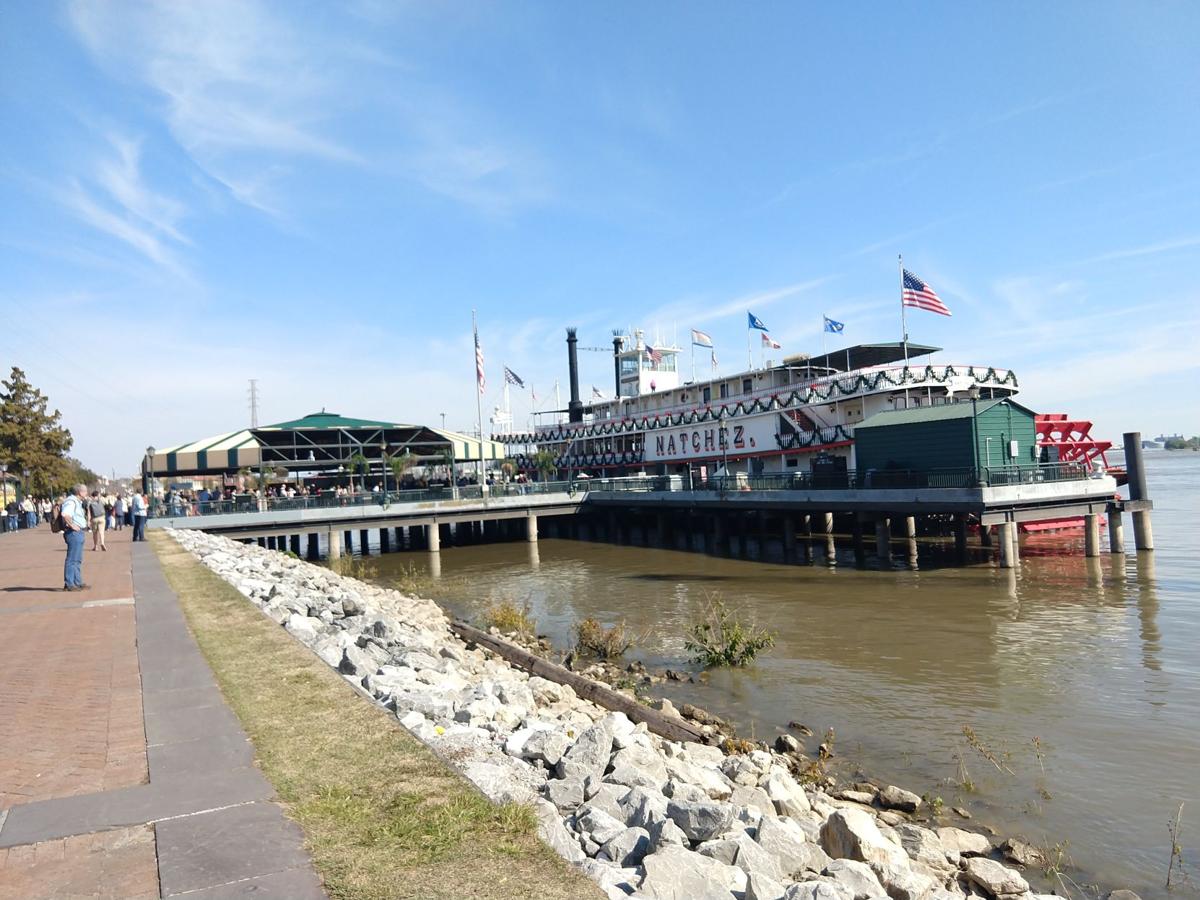 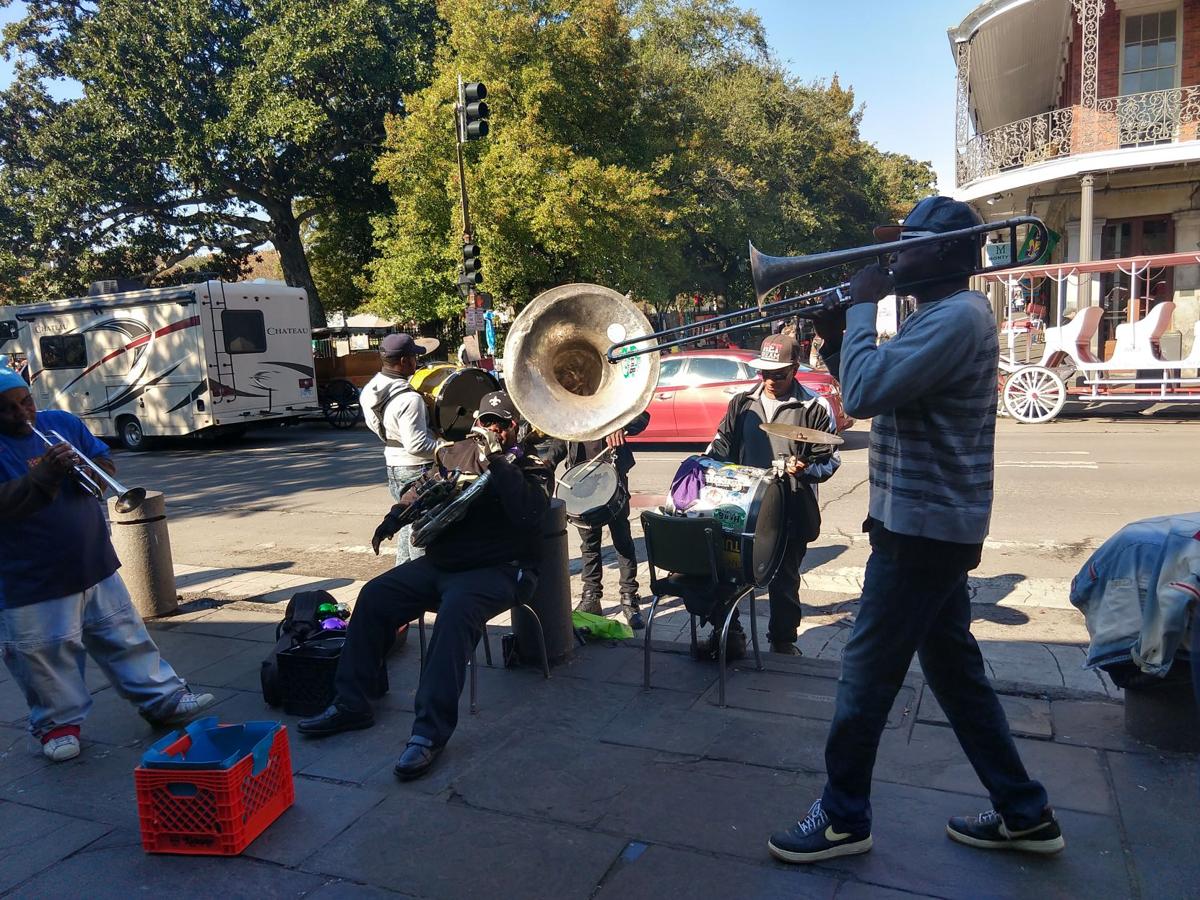 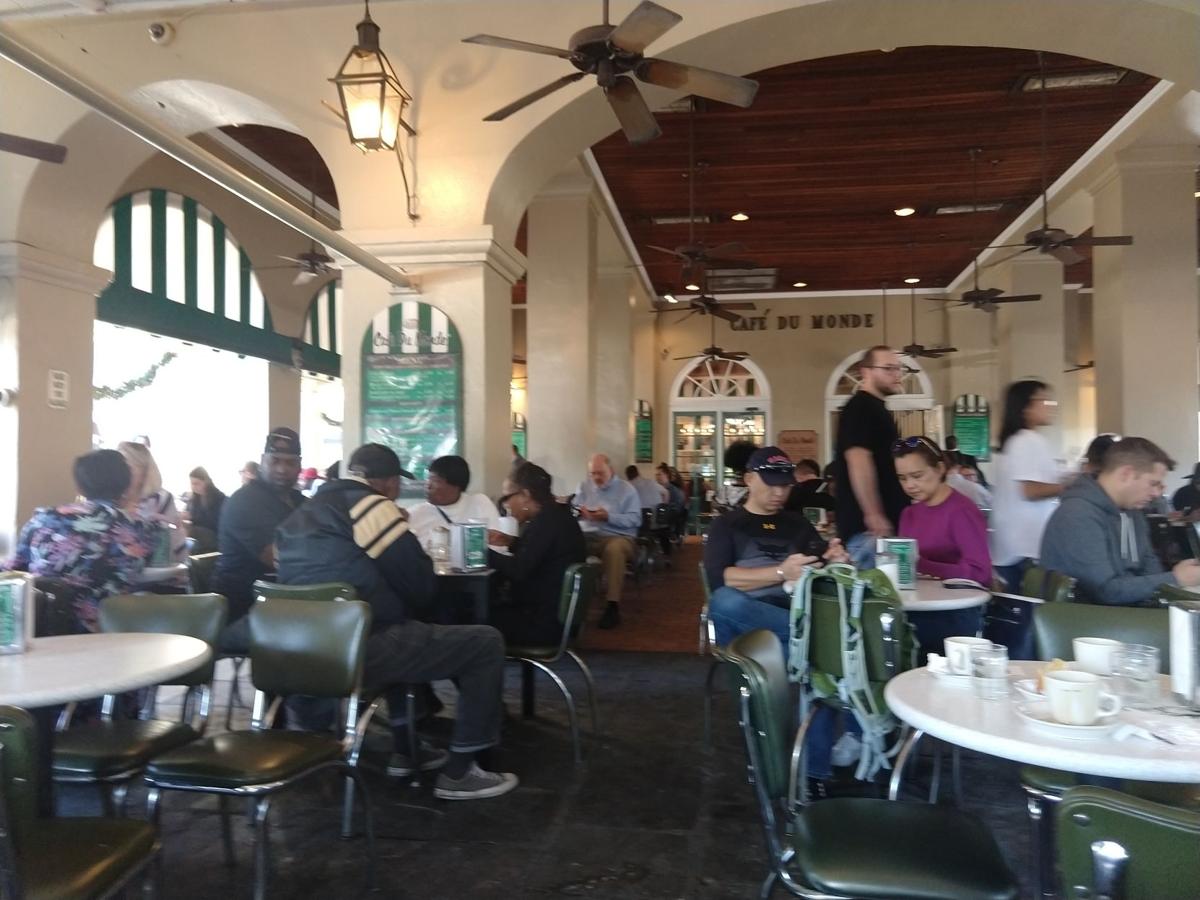 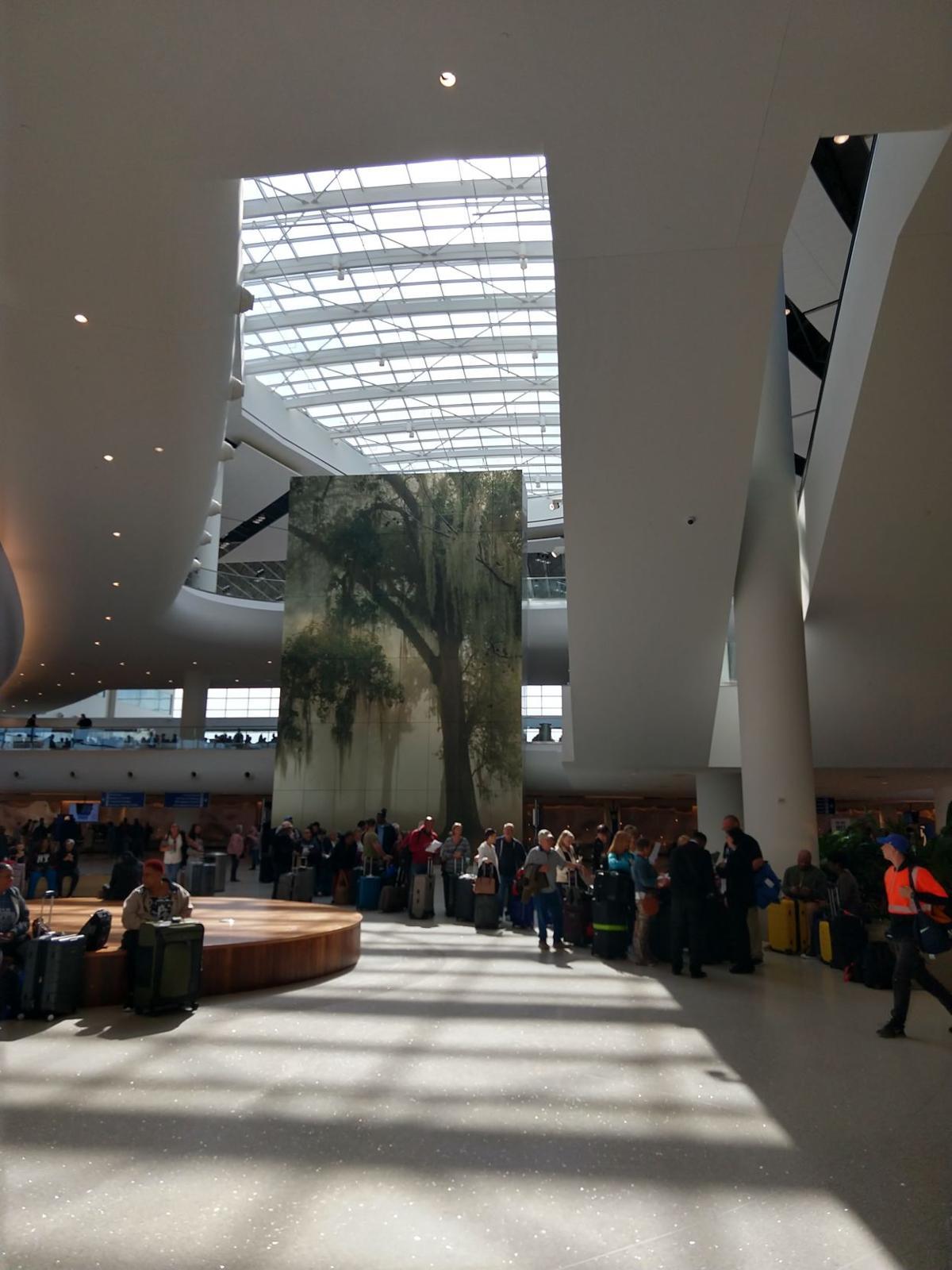 Got beads? No Mardis Gras celebration is complete without these shiny, green, gold, and purple necklaces./Mark Gstohl (Flickr) 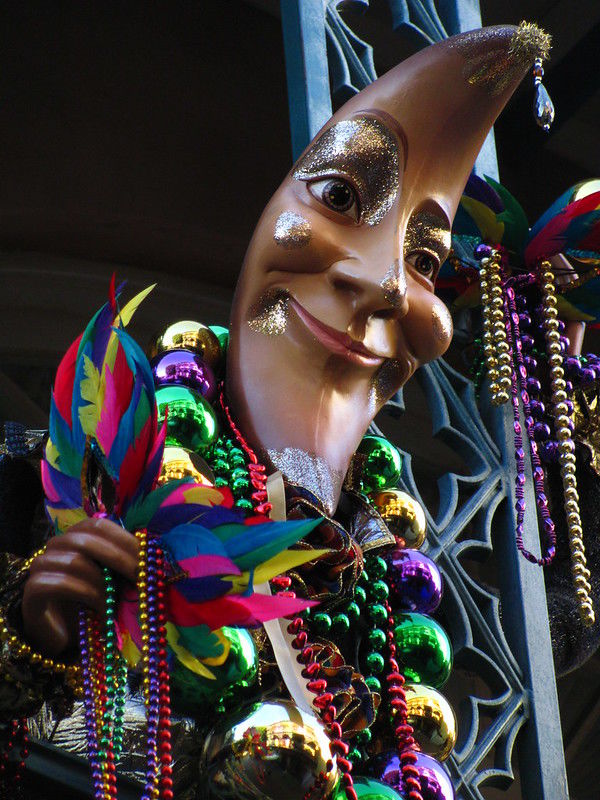 “Laissez Les Bon Temps Rouler” (Let the Good Times Roll) is happening in New Orleans, Louisiana, this month as people gather in local bars and restaurants and on the streets of the French Quarter to celebrate Mardi Gras. Parades bring a sea of elaborate floats, marching bands, beauty queens, kings and queens in regal attire, and costumed revelers reaching for shining beads and other prizes flying from floats.

Mardi Gras celebrations began in early January this year and continue through Feb. 25, Fat Tuesday, just before the official beginning of Lent — a period of fasting and prayer for 46 days leading up to Easter Sunday. Local churches, including the iconic St. Louis Cathedral in Jackson Square, are hosting worship services this month to mark the religious holiday. And at family dinners and parties people look for the tiny plastic replica of the Baby Jesus in a king cake, a special dessert decorated in purple, green, and gold sugar — the official Mardi Gras colors.

A European tradition dating to medieval times, Mardi Gras was first celebrated in the New World in what is now Mobile, Alabama, with the arrival of French-Canadian Jean Baptiste Le Moyne Sieur de Beinville on March 2, 1699. After he established New Orleans in 1718, Mardi Gras gained momentum in the Crescent City and continued to evolve through the decades. In early times masked revelers would ride through the streets in carriages and on horseback guided by gaslight torches (flambeaux) on their way to festive balls and secret meetings of “krewes.”

Today krewes with names like Endymion, Bacchus, Zulu, and Rex spend months planning private balls and preparing elaborate floats for parades that take place during January and February all over New Orleans and in neighboring parishes and towns. (A complete schedule of parades and routes for Feb. 1, 7-9, 14-16, and 19-25 is available at mardigrasneworleans.com). Festivities culminate in Uptown New Orleans, with several parades on Feb. 25, featuring the krewes of Zulu, Rex, Elks Orleans, and Crescent City, with additional parades in nearby Metairie, Covington, Folsom and Lacombe. (The most famous member of the Zulus was musician Louis Armstrong, by the way.) The holiday is also celebrated in towns and parishes all over the state of Louisiana (louisianatravel.com), plus Mobile, Alabama, and in other U.S. cities and towns with a Catholic and/or French heritage. Rio de Janeiro in Brazil and Montreal in Canada also celebrate Mardi Gras.

If you haven’t visited New Orleans before, it may be helpful to take a tour on the big red Hop-On Hop-Off bus for an orientation of the city. You can also take special tours that center around food, jazz, ghosts, historic homes, cemeteries, plantations, swamps, Hurricane Katrina and other themes. Regardless, New Orleans is a walkable, fun-loving city with good public transportation. Don’t miss a ride on the St. Charles Streetcar, which runs from Canal Street to the Garden District. It was the inspiration for Tennessee Williams’ hit play A Streetcar Named Desire, made into a blockbuster movie starring Marlon Brando in 1951. A ride on the Natchez, which recalls the heyday of paddle wheeling, leaves from the Port of New Orleans on the Mississippi River. Horse-drawn carriage rides depart from Jackson Square in the French Quarter. Both are good ways to see the city.

New Orleans offers a plethora of attractions (St. Louis Cathedral, Jackson Square with its equestrian statue of President Andrew Jackson, Louisiana State Museum, French Market, River Walk, Preservation Hall, National World War II Museum, Lafitte’s Blacksmith Shop, and other sites), as well as lodging and dining options featuring Cajun and Creole cuisine. Some visitors go to New Orleans just to eat at seasoned establishments such as Brennan’s, Arnaud’s, Commander’s Palace, Mother’s, and Cafe du Monde (famous for coffee and beignets). The original is located in the French Quarter, plus there’s one at the fabulous new Louis Armstrong Airport, an attraction in itself (neworleans.com). New Orleans’ two national historic sites — Jean Lafitte National Historic Site & Reserve and New Orleans Jazz National Park (nps.gov) — are also worth a visit. You can hear free jazz at the national park and on many street corners in the city, especially in the French Quarter (Vieux Carre).

If you want to celebrate Mardi Gras closer to home, two special events in D.C. offer that opportunity. The District Pier on Wharf Street throws a party from 4-7 p.m. Feb. 22, with music, dance, and food, plus special activities for children, including s’mores at Caps Campfire (wharfdc.com). Union Market’s Dock-5 hosts the 2020 Mardi Gras Extravaganza from 6-10 p.m. Feb. 25. Proceeds will benefit the DC Central Kitchen (DCCK). Events include a competition for the Best Hurricane Cocktail, under the direction of mixologist Gina Cherservani; a live broadcast of Bourbon Street with a 20-screen backdrop, thanks to Pike Productions; NOLA-inspired bites, including king cake and king cake doughnuts and milkshakes, curated by Chefs David Guas and Spike Mendelsohn; and complementary masks and beads (mardigrasextravaganza.com).

Virginia Is for Lovers

Why not celebrate love this month at The Valentine Museum? As Richmond’s oldest museum, it was founded in 1898 by Mann S. Valentine II, who had amassed a fortune in “beef juice” health tonic. He left his art collection, The Wickham House (his home dating to 1812) and an endowment of $50,000 to sustain the private museum, now accredited by the American Alliance of Museums. It focuses on the 400-year history of Richmond, offers walking tours and hosts special programs and events. Current exhibitions are ‘Voices from Richmond’s Hidden Epidemic,” HIV/AIDS, which runs through May 15, and “The Ballot Battles: Richmond’s Social Struggle for Suffrage,” a century-old movement that began in 1919, through Sept. 7 ([804] 649-0711 or thevalentine.org).

While in Richmond, you might celebrate 125 years of love at The Jefferson, which opened in downtown Richmond in 1895. The hotel’s Romance Package includes accommodations, sparkling wine upon arrival, room service, a full American breakfast for two, gratuities, valet parking, and fresh flowers ([888] 918-1895 or jeffersonhotel.com).

Love is always in the air at The Salamander Resort & Spa in Middleburg, Va., offering a bed-and-breakfast package that includes luxurious accommodations, plus breakfast in your room or at Harrimans ([540] 751-3160 or salamanderresort.com). The Omni Homestead in Hot Springs, Virginia, serving guests since 1766, has a romance package that includes elegant accommodations, two mini-bottles of Moet & Chandon Rose Champagne and chocolate-covered strawberries. Upon arrival, enjoy a romantic turndown with robes, music and lighting, the breakfast buffet or another option, and a late checkout at 1 p.m. In honor of overnight guests, The Omni makes a donation to Feeding America ([540] 839-1766 or omnihotels.com).

Say “I Do” on the Love Boat

Princess Cruise Lines has set out to achieve a Guinness World Record by hosting the largest vow renewal ceremony on the Regal Princess and the Royal Princess, to be conducted simultaneously on Feb. 11. The Love Boat’s Captain Stubing (Gavin MacLeod) with his TV daughter Vicki (Jill Whelan, the Princess ambassador), will officiate at the ceremony on the Regal Princess, sailing from Fort Lauderdale to Cozumel, Mexico, Feb. 9-16. Trista and Ryan Sutter, the first couple featured on “The Bachelorette,” will officiate at the ceremony on the Royal Princess cruise from Los Angeles to Mexico, which includes an overnight stop in Cabo San Lucas, the home of Lover’s Beach ([800] 774-6237 or princess.com).