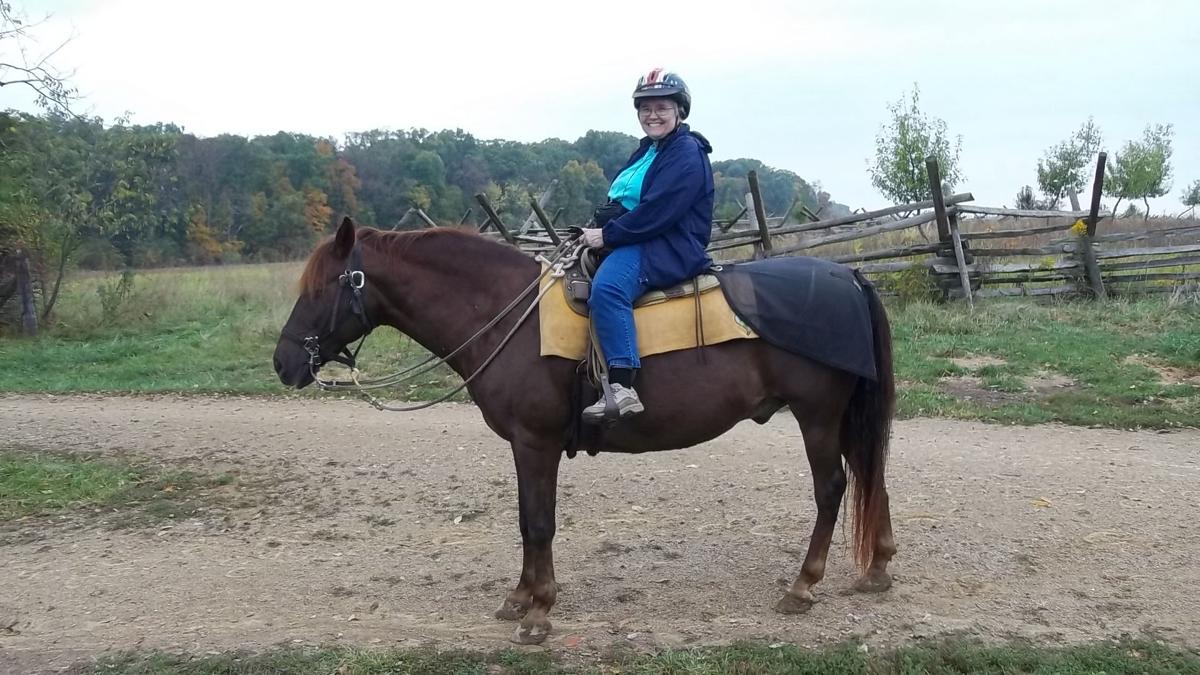 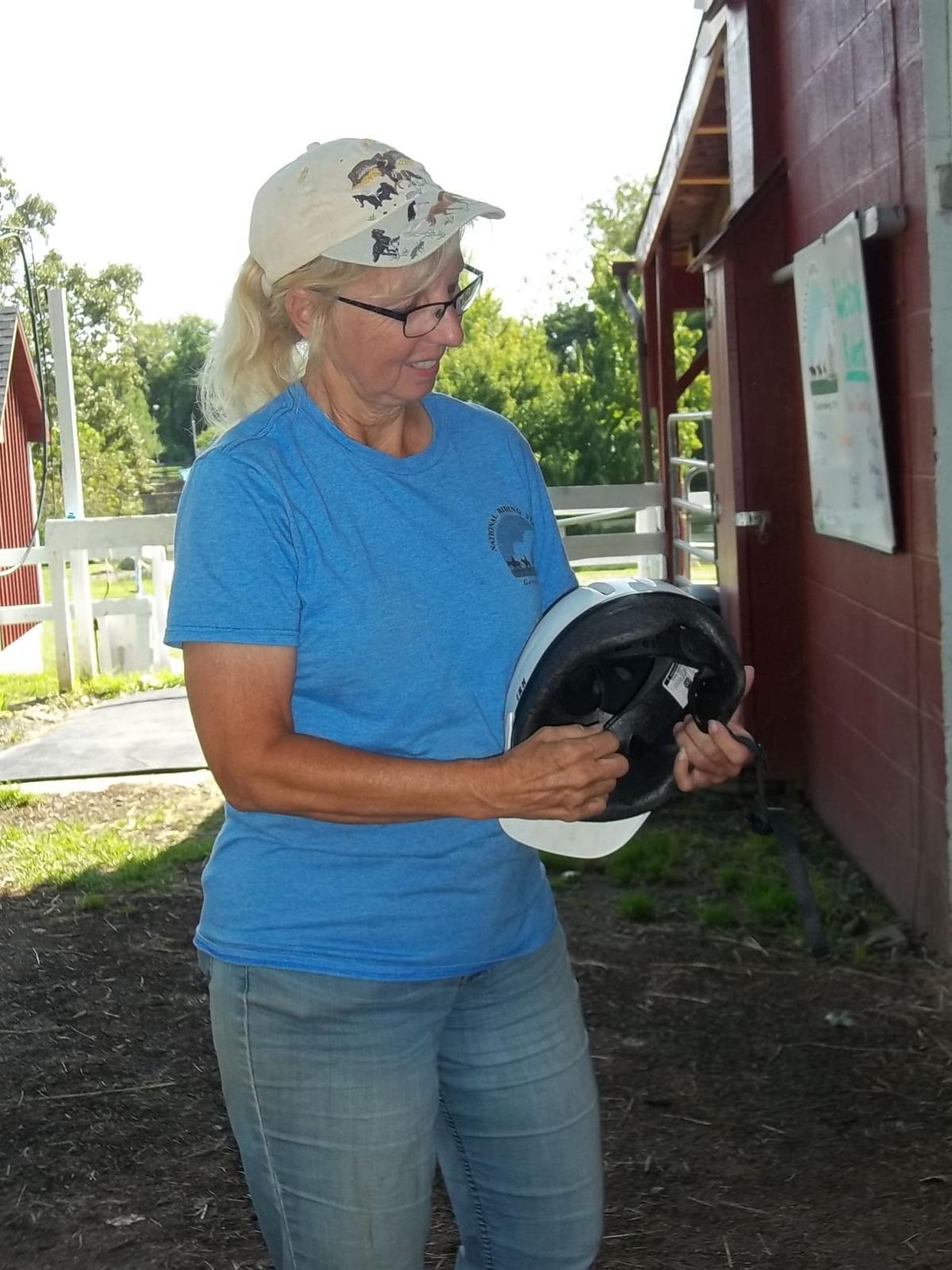 Terry Lachter gets helmet ready for rider. She and her husband, John, bought the National Riding Stables in 2015. John Latschar is a retired Superintendent of the National Military Park who oversaw the rehabilitation of the horse trails, and she has been Licensed Battlefield Guide for 27 years./Kathleen Dawson 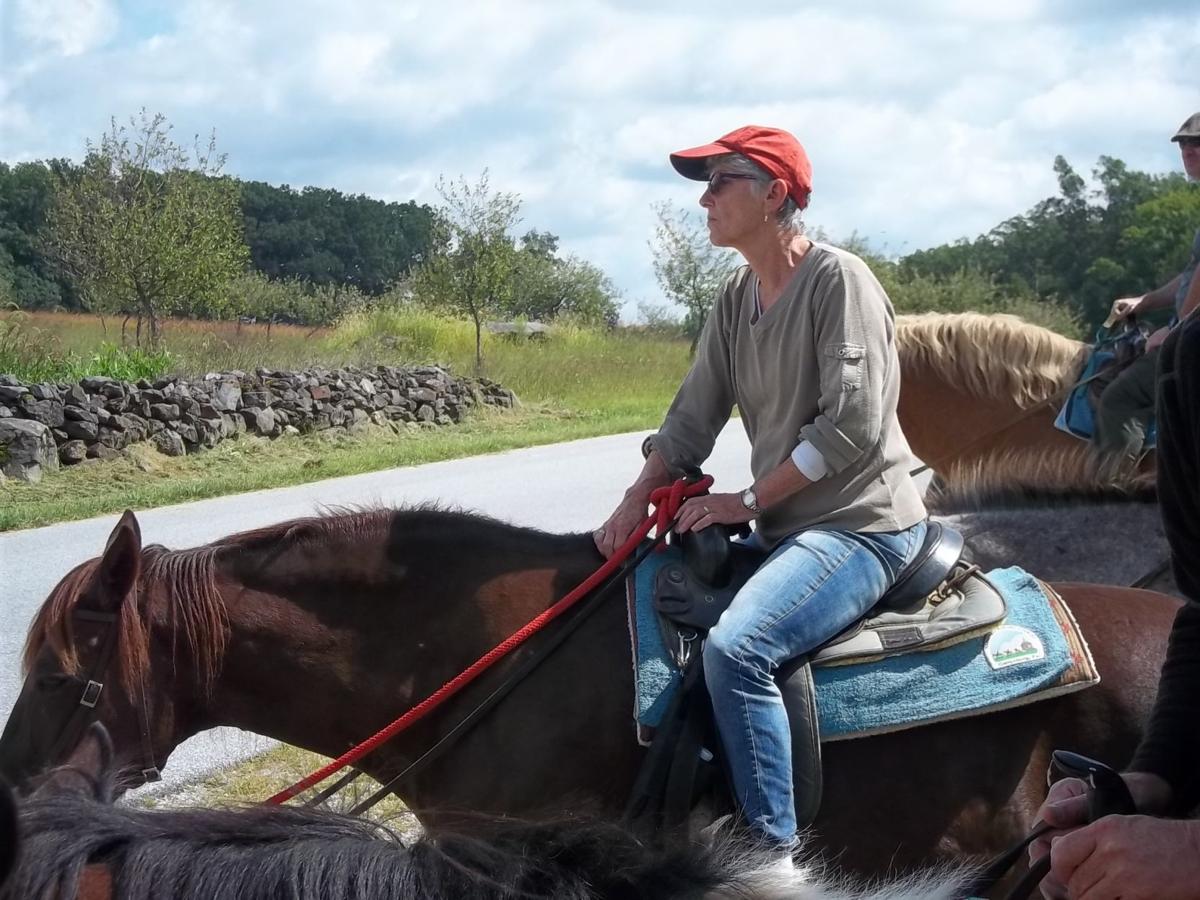 Ann Ferguson pets her hose while listening to Talk abouit the battlefield./Kathleen Dawson 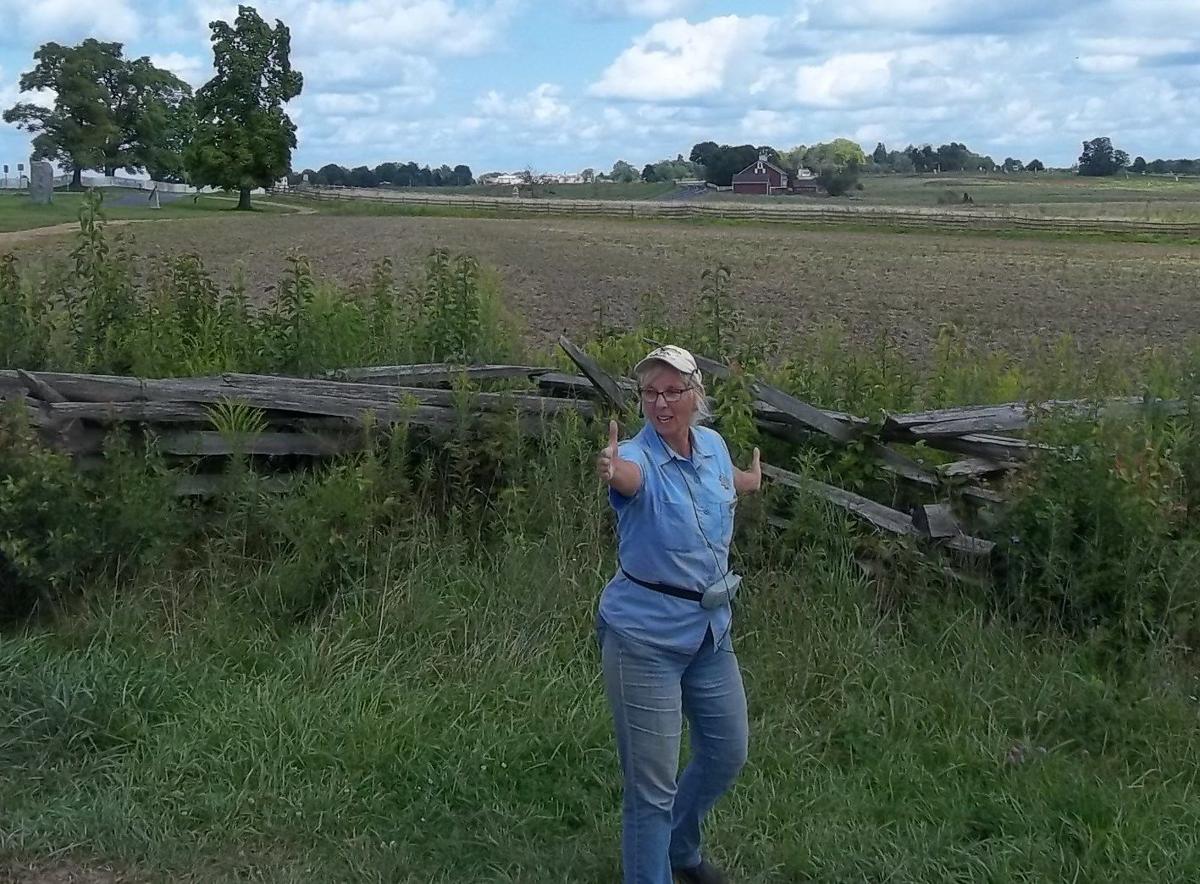 Terry Lastchar delivers lecture about the battle on the site of Picketts' Charge (standing near the right flank, with the left flank the builidng on the horizon)/Kathleen Dawson 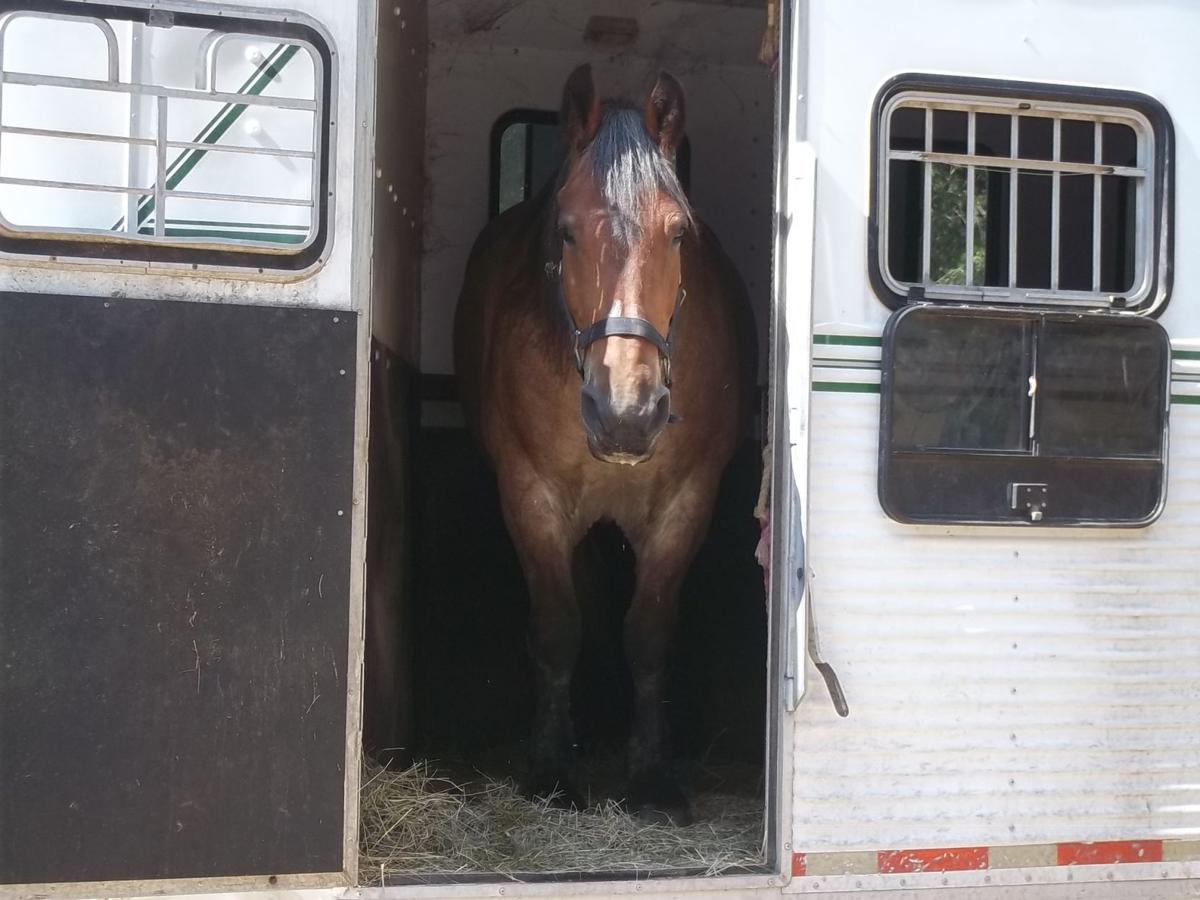 "Mo" doesn't want to leave the trailer. Through the ride, many of the stops were for Mo ("slow Mo") to catch up with the others./Kathleen Dawson 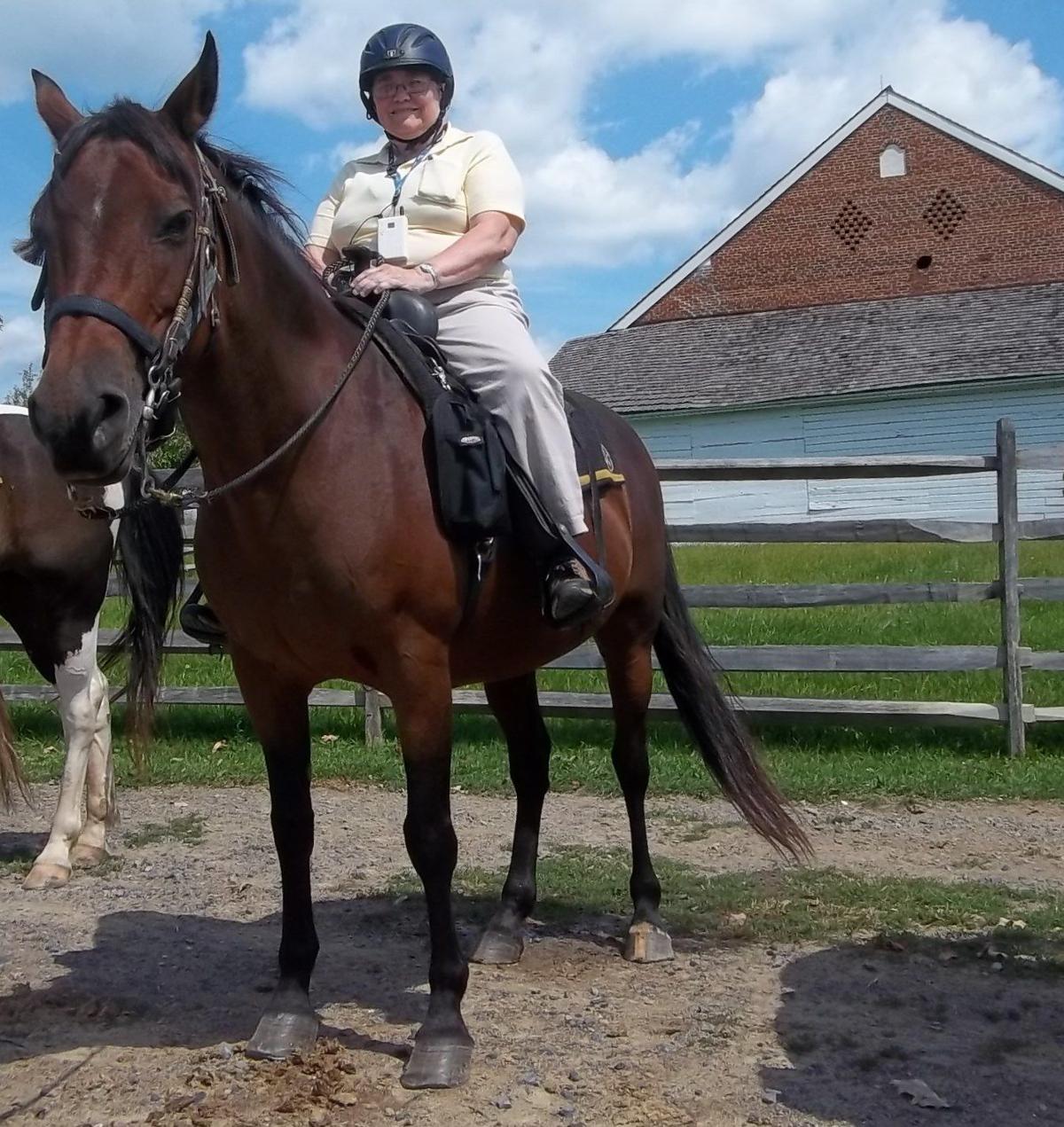 Me on Spirit at the Trostle Barn/Kathleen Dawson

As the long line of horseback riders crossed Taneytown Road, a young girl in a waiting car turned eagerly to her parents. We riders could imagine their conversation for the rest of their vacation.

Before leaving home, I downloaded and signed liability release forms. The horses are well-trained, but they are 1,000-pound animals and accidents can happen. The stables provide helmets unless a rider deliberately declines it in writing. The agreement also bans flapping coats, unsecured hats, and purses or other dangling items that can startle the horses. The stables also insist on solid-toed shoes without slippery soles and recommend long pants. Previous riding experience is not necessary.

Because I hadn’t ridden since adolescence, Latschar paired me with “Punkey,” a gentle bay used by beginners.

As we entered the battlefield single-file, Punkey stopped to graze. As with bicycles, you apparently never forget how to ride a horse. I clapped my heels in Punkey’s ribs, pulled sharply on the reins, and ordered, “Get up!” Punkey stepped briskly back into line, and the “wrangler,” the stable employee bringing up the rear, laughed.

“You’ve got a rider aboard this time, Punkey.”

The rides stop at several points for the guides to describe the history of the site and for riders to take pictures. The wranglers will also take pictures of riders with the riders’ cameras during these stops. (I looked at mine and promptly resolved to go on a diet.)

There are a few unscheduled stops. Like toddlers, horses can’t be persuaded to “go before you leave home,” so periodically the entire line halts until the horse in question finishes his business.

Both rides stopped at places like the Spangler Farm, the Peach Orchard where General Daniel Sickles stationed his men in violation of his orders to strengthen the Union forces at Devil’s Den. We stopped at the monument marking the site of his wounding and the Trostle Farm, where both rides turned back.

The rides presented new perspectives to those of us who knew some of the battle’s history. Until then, I had never visualized just how far from the Union line Sickles had advanced. Riding up to the Spangler and Trostle farms, where the Confederates ate the breakfast the Trostles left on the table, and seeing the cannonball in the barn, unnoticed from my car earlier, brought home the fact that not just soldiers suffer from war.

Latschar directed us to stop with our horses abreast of each other. She told us, “You’re on the right flank of Pickett’s Charge. The left flank was at those rooftops you can just see on your left. They advanced across this field, and the copse of trees is the ‘high-water mark’ where some of them reached the Union lines.”

Most of us had been at that copse, but from there the swells and the width of the charge were not obvious. Seeing the distance and the elevation (and realizing the soldiers on July 3, 1863, made the charge on foot while we were on horses), I fully realized the scale and the sacrifice of that charge.

The next day, Hickory Hollow Farm’s guide led us along wooded paths, emerging on the battlefield at the statue of Robert E. Lee, approximately where he watched the bloodletting he had ordered. Pickett’s Charge began here, and the distance, seen from that perspective, is again sobering.

Information about rides is available from several sources online or in tourist booklets from Gettysburg. They operate March through November, and only very severe weather or thunderstorms cancel them, with a rain check or refund is given.