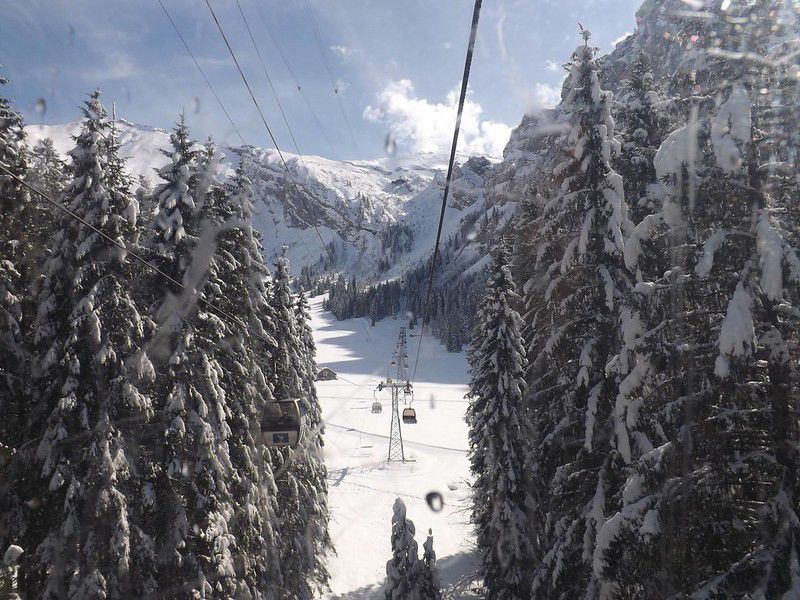 To get to the gorgeous Mount Titlin, skiers must take a cable car ride through the snow covered treetops./www.shearings.com 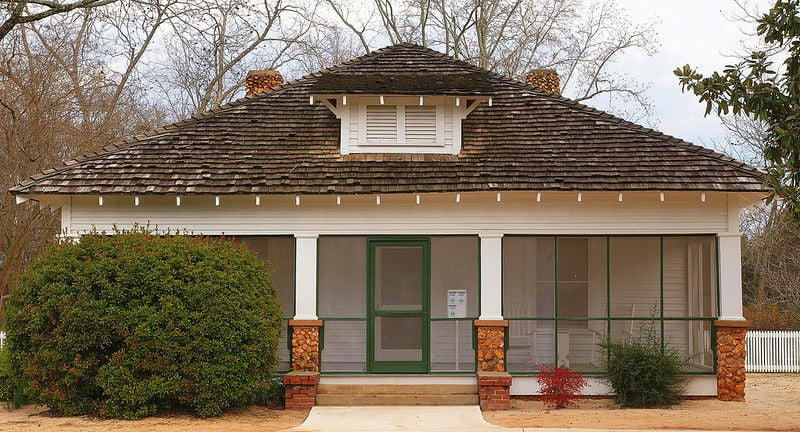 If you're looking to stay State-side for your winter vacation, take a trip down to Georgia for a historically rich getaway./Jim Bowen (Flickr) 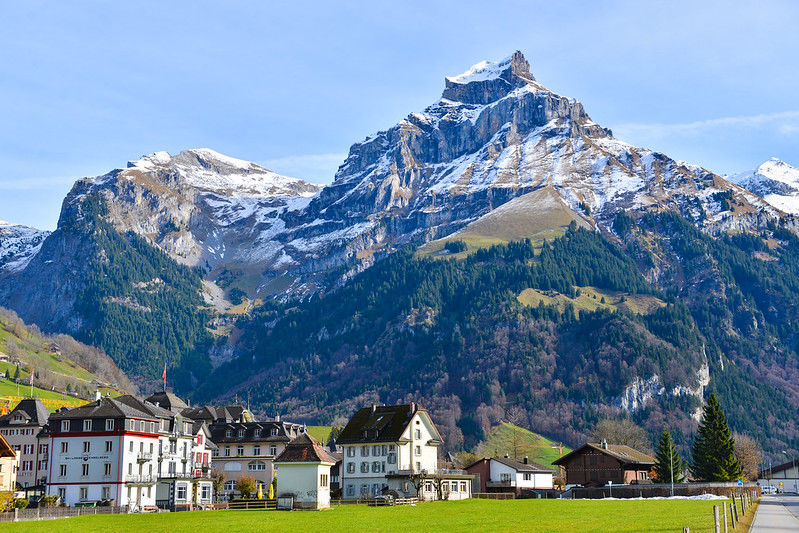 Expand your skiing horizons with the impressive slopes located in Engelberg, Switzerland./williamwheatley (Flickr) 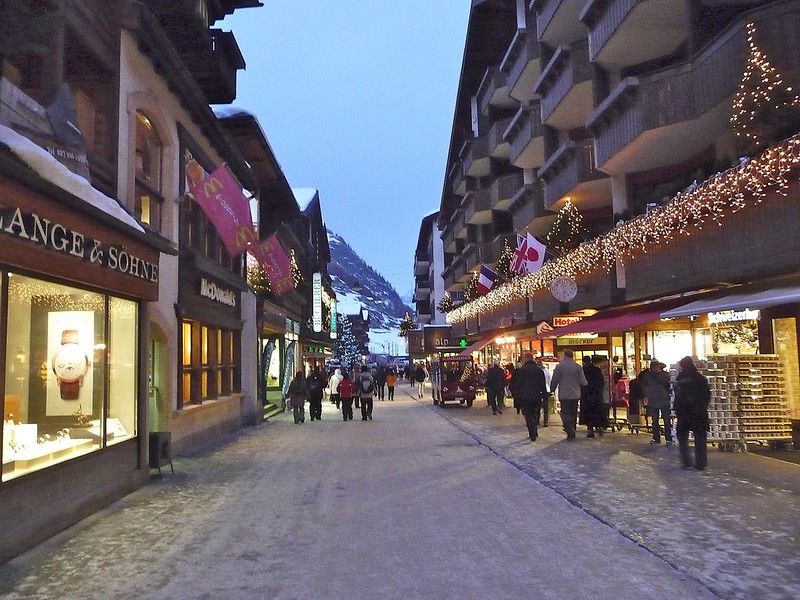 On the Italian border of the canton of Valais in the west of Switzerland, at the end of the 30 km-long Nikolaital, lies Zermatt, the village at the foot of the Matterhorn, the most photographed mountain in the world. For our guests from all over the world, Zermatt epitomizes their image of Switzerland: high-alpine, awe-inspiring and original. Almost one-third of the 4,000-metre mountains in the Alps are grouped around this word-famous health resort, which has been visited by mountaineers from all around the world since the first successful ascent of the Matterhorn in 1865. The hotels and restaurants are world-class, and the ski area is not only the highest in the Alps – it is also one of the best developed and most convenient in the world, ensuring thrilling sporting experiences on the steepest slopes in the world – and that 365 days a year. The climate is of an excellent quality: with 300 sunny days a year, there is less rainfall than anywhere else in Switzerland. The air in Zermatt is clear, dry and clean, because, since 1947, only electric cars without a combustion engine are allowed to operate in the village. Things are a little different in Zermatt. Zermatt – A world of its own.

After living in the White House for four years, Georgia Governor’s Mansion for four years, and various Navy posts for eight years, Jimmy and Rosalynn Carter returned to their hometown of Plains, Ga., in 1981. Since that time, they have managed to pursue a quiet, simple life, living in the only home they have ever owned, actively participating in community life, and attending Maranatha Baptist Church, where he has taught Sunday school for decades.

The Carters have also devoted their time to the Carter Center in Atlanta, a nonprofit focused on “Waging Peace, Fighting Disease, and Building,” and to Habitat for Humanity, a nonprofit organization that provides housing for communities in all 50 states and in 70 countries around the world. In fact, the Carters often show up at Habitat sites — in their work clothes, with hammers in hand — as part of the construction crew. When a project is finished in a matter of days, they give the new homeowners a Bible and the keys to the house. Jimmy Carter has received numerous awards, including the prestigious Presidential Medal of Freedom in 1999 and the Nobel Peace Prize in 2002.

While President Carter was in the Oval Office, visitors began streaming into Plains for a glimpse of the little farming community where the family operated a peanut business, an unlikely place for a future U.S. president to grow up. During his tenure in office the town blossomed into a tourist destination that continues to draw many visitors each year. Several sites are a designated part of the Jimmy Carter National Historic Site — Plains High School which houses the Visitor Center, Plains Depot, where he launched his bid for the Presidency, the Jimmy Carter Boyhood Home (all open to the public), and the Carter Campground (closed to the public).

The National Park Services map (nps.gov) features a walking tour and a driving tour, which also includes the Plains Historic Preservation District. Start at the Visitor Center at Plains High School, where Julia Coleman inspired her students, including Jimmy Carter and Rosalyn Smith, to pursue their dreams. Take time to see the exhibits and the video and pick up brochures and books, including those penned by Jimmy Carter, the author of 25 titles. Don’t miss the Train Depot, featuring details on the Carter campaign and the road to the White House. Be sure to drive out to the farm, where the Carters lived and worked during Jimmy’s early years. His father, Earl Carter, ran the farm while his mother, Lillian, worked as a nurse in town.

Along the way you might stop at Lebanon Cemetery, the final resting place of Carter family members. Homes and churches associated with the Carters are designated sites in the Historic District — including the Lillian G. Carter Health & Rehabilitation Center, where Jimmy was born on Oct. 1, 1924; Plains United Methodist Church, where the Carters got married in 1946; the Billy Carter Service Station (1972-1984), where the national press often gathered; and Maranatha Baptist Church, which the Carters joined in 1981 (229-824-7896 or mbcplains.org).

If you want to mail postcards with the official Plains postmark, purchase stamps and mail the cards from the post office. “A Self-Guided Tour of Plains, Georgia” booklet features pictures and descriptions of all the sites, and the jimmycarter.info website has everything you need to know about Plains, plus audio and video narrated by the Carters. The couple was instrumental in preserving the historic district of the town and the establishment of the Rosalynn Carter Butterfly Trail. The Plains Inn & Antiques Mall on Main Street features rooms themed around several decades, from the 1920s through the 1980s.

The Buffalo Cafe on Main Street is the town’s only restaurant (open daily for lunch and dinner; closed Sunday). Americus, about 10 miles east, has several restaurants, as well as the Global Village & Discovery Museum, which tells the story of Habitat for Humanity around the world (habitat.org). Whether you spend a few hours or a few days in Plains, you’ll come away with a good understanding of the town and the Carters.

Now that the New Year is underway, we can look toward more celebrations in 2020. The Martin Luther King Jr. holiday falls on Monday, Jan. 20, which makes for a long weekend to do a service project, visit the Martin Luther King, Jr., National Historical Park in Atlanta, Ga., work on taxes, enjoy winter sports, or pursue other activities. The National Park Service site, which includes Dr. King’s birthplace, church, and burial place, is Atlanta’s most visited attraction. Be sure to see “Georgia’s Global Peacemakers: The Carter and King Legacy” exhibit on Dr. King and President Carter, two Georgians who were great leaders of change.

February ushers in more holidays — first Valentine’s Day, Feb. 14, which falls on a Friday, followed by Presidents Day and Washington’s Birthday on Monday, Feb. 17, — all wrapped up into one super weekend.

If you are a little more adventurous and you have time to travel, think about a ski trip to Switzerland. The Alpine country is home to resorts such as Zermatt near the Matterhorn; St. Moritz, two-time host of the Winter Olympics; Grindelwald in the Bern Oberland; and Engelberg, south of Lake Lucerne in central Switzerland. Considered one of the country’s top ten ski regions, Engelberg offers downhill skiing, cross-country skiing. snowboarding, and sledding from early October through the end of May. Children love the village’s playgrounds and toboggan runs. Founded in 1120 by Benedictine monks, the family-friendly, walkable village is known for its historic monastery, hotels, restaurants, and shops. The monastery, celebrating its 900th anniversary this year, offers tours in German and free concerts during the summer on one of the largest organs in Europe. Mount Titlis (elevation 10,683 feet) can be reached by cable car and the Titlis Rotair gondola, the first fully rotating gondola in the world. Visitors view the glacier’s surface from the Ice Flyer chairlift and the summit of Mount Titlis from the Cliffwalk, the highest suspension bridge in Europe. Near the Cliffwalk is the entrance to the amazing, explorable Glacier Cave. Because of its accessibility by train from Lake Lucerne (a 30-minute ride), cars are not necessary. In fact, Engelberg might serve as your travel base, plus lodging is less expensive (engelberg.ch; myswitzerland.com).

Planning to take more adventures this year? “Forbes” magazine (forbes.com) has released its list of “The 20 Best Places to Visit in 2020.” Argentina, Chile, Mexico, and the United States each claimed two destinations: